Massive news: 311 & New Politics is coming to USANA Amphitheater on Saturday 12th August 2017 to give fans the best night of their life! So what are you waiting for? Hit the “Buy Tickets,” button above to get your tickets, but hurry, they won’t last long!! 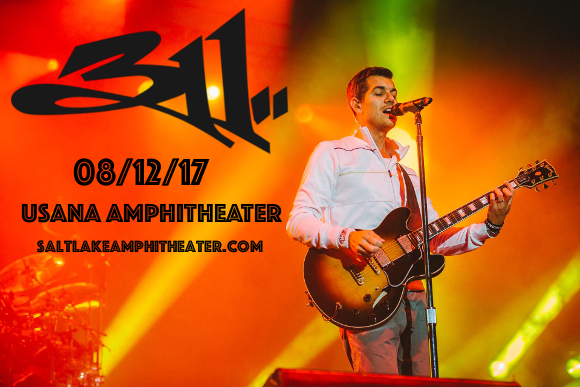 Formed in Omaha, Nebraska, 311 (pronounced three-eleven) is an alt rock band who blend a variety of genres into their sound – from reggae rock to rap rock to nu metal, anything goes!! Formed in 1988 by vocalist and guitarist Nick Hexum the rest of the current line-up includes lead guitarist Tim Mahoney, bassist Aaron "P-Nut" Wills, and drummer Chad Sexton. Best known for their triple-platinum certified 1995 album “311,” featuring the massive singles "Down" and "All Mixed Up", 311 went on from there to achieve massive worldwide success.

In support are the Danish rock group New Politics. Formed in 2009 and at the moment consisting of band members David Boyd, Søren Hansen, and Louis Vecchio, the band have gained attention for their eclectic genre-mixing style, incorporating elements of punk, pop, electronica and dance into a hard rock sound! The band released their first, self-titled album in 2010, and have since gone on to release two more: “A Bad Girl in Harlem” in 2013 and “Vikings,” their latest, in 2015.

Don’t miss out on your chance to attend this night of genre bending rock, featuring every style from dance to metal!! Book your tickets to see 311 and New Politics today!