Bringing you some seriously sunny '90s vibes, 311 & The Offspring are coming to USANA Amphitheater on Friday 27th July 2018 with their co-headlining Never-Ending Summer Tour! The bands, who recently announced that they will be releasing covers of each other's songs (The Offspring will release a cover of 311's "Down" and 311 will release a "reggaefied" cover of The Offspring's "Self Esteem"), will be joined for the night by the spectacular Gym Class Heroes in support! 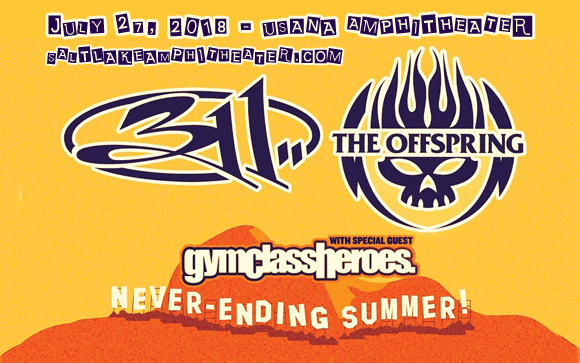 American rock band The Offspring was formed in 1984 in Garden Grove, California, originally under the name Manic Subsidal. Along with fellow California punk band Green Day and Rancid, the band was hailed as a huge influence on the 1990s resurgence of punk rock. The band's third studio album, Smash (1994), was a commercial success and introduced The Offspring to a wider audience. The album was the first album released on Epitaph to obtain gold and platinum status, and sold 11 million copies, which set a record for most albums sold on an independent record label. The band signed to Columbia in 1996, and found continued commercial success with its next four albums – Ixnay on the Hombre(1997), Americana (1998), Conspiracy of One (2000) and Splinter (2003) – which achieved platinum, multi-platinum, platinum and gold status respectively. The Offspring's tenth studio album is slated for release in 2018.