MASSIVE news, metal heads!! Avenged Sevenfold are hitting the USANA Amphitheater on Friday 11th August 2017! as part of their tour promoting their new album “The Stage”!! If you're a fan of the metalcore five-piece, then whatever you do, don't miss this show – tickets are in limited availability so don’t delay in getting yours! Hit the “Buy Tickets,” button NOW!! 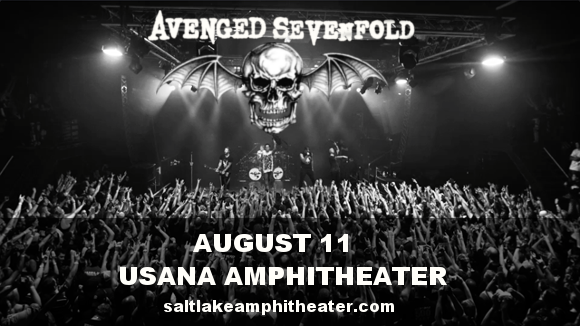 Formed in high school in 1999, and taking the aliases of M. Shadows, Zacky Vengeance, Synester Gates, Johnny Christ, and The Reverend, Avenged Sevenfold fast developed their signature sound and revealing it to the public with their debut album, "Sounding the Seventh Trumpet” just two years later. Their second album, the first on the Hopeless label, 2003s “Waking The Fallen,” shot the band towards widespread critical recognition and earned them the attentions of major record label Warner Bros. Their next album, “City Of Evil,” was a massive mainstream breakthrough, with critics and listeners alike completely taken with their unique mix of metal, post hardcore and punk-pop. The band went on to win 'Best New Artist' at the 2006 MTV Video Music Awards.

Soon enough, they were back in studio, and over the years that followed released one massive hit album after another, constantly evolving in style and direction, with fans loving each and every turn. Their latest album, “The Stage,” is the band’s first foray into the world of concept albums – and, as the band’s previous experiments have been, its a phenomenal work.

Don’t miss out on your chance to hear “The Stage,” live – get those tickets while you can!!