Are you hyped for the most unusual and epic tour of the year!? That’s right, 2019 brings you Blink-182 and Lil Wayne, on an enormous co-headlining tour, winding its way around the US until it reaches the USANA Amphitheater on Monday 2nd September 2019!! Tickets are going to fly off the shelves for this, so don’t miss your chance – grab yours now while you still have the opportunity! 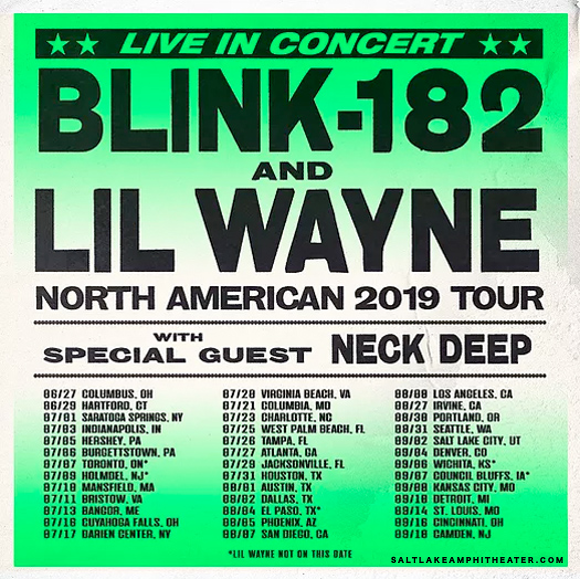 Lil Wayne’s last album, “Tha Carter V” was a smash hit, topping the charts and earning second-largest streaming week for an album of all time! “Whenever I have to pitch in for a Young Money album, a Like Father, Like Son album and something like that and maybe something out the blue, but the way I'm working on this album, it's to me, the way it seems like now, it seems like it'll be impossible for me to work this hard again for anything else,” the rapper had said about the record at the time, and it had seemed to fans that it might be the legendary hip-hop artist’s last for quite some time. However, it looks like he just couldn’t stop – less than a year on and he’s already got another about to come out! The details are currently unknown, but its scheduled for release just before the tour.

Get ready to sing along with all the new material from two of your favorite artists live – grab your tickets to Lil Wayne and Blink-182’s upcoming show NOW while you can!!