Ladies and gentlemen, are you hyped for Brad Paisley?? The country legend is hitting the road once more in 2019, and this time, he’s taking Chris Lane and Riley Green along with him for the ride! They’re on their way to the USANA Amphitheater on Thursday 13th June 2019 – get tickets while they last! 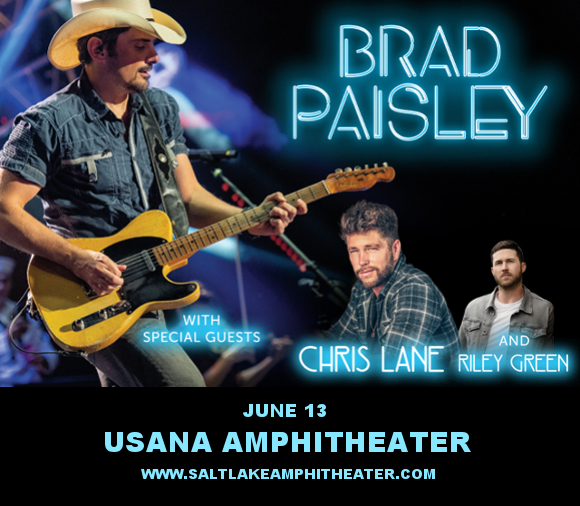 With a new album up ahead, fans can mostly expect to hear material from Brad Paisley’s latest record, “Love And War.: The album is focused on big collaborations, but it isn’t just name-dropping – these extra voices really help bring the album to life. Among them are collaborations with rock legends including McJagger.

“I was struck by his focus,” Brad Paisley said, reflecting on the collaborative process at his farm. “You would think at this point, with nothing left to prove, that this man would phone it in, but he doesn’t… He’s a student still, and that’s so enlightening to see, because this is also a man who is probably more responsible for the paths that music took. There’s just a handful of people in his league, and here he is hungry to continually to create.”

Get ready to see Brad Paisley at his inspired best LIVE at the USANA Amphitheater – have you got those tickets yet??