'This is country music', Brad Paisley once said; and by that he means business. Indeed Brad Paisley is once again is on a hot pursuit as his extensive tour set is about to get underway, dubbed as the 2020 World Tour. As Brad Paisley dropped the official word of his tour dates, country music fans from this neck of the woods are now exuberant and excitedly anticipating his gig at the USANA Amphitheater on Saturday 30th May 2020. Joining him for most of the trek will be “Take It From Me” singer Jordan Davis as well as Gabby Barrett, riding high on the charts with his new single “I Hope”. Find the heart of country music right here with Brad Paisley. And tickets aren't that far too. In fact, they're right at your fingertips. Click that 'get tickets' link and you'll be well on your way to the heart of country music. 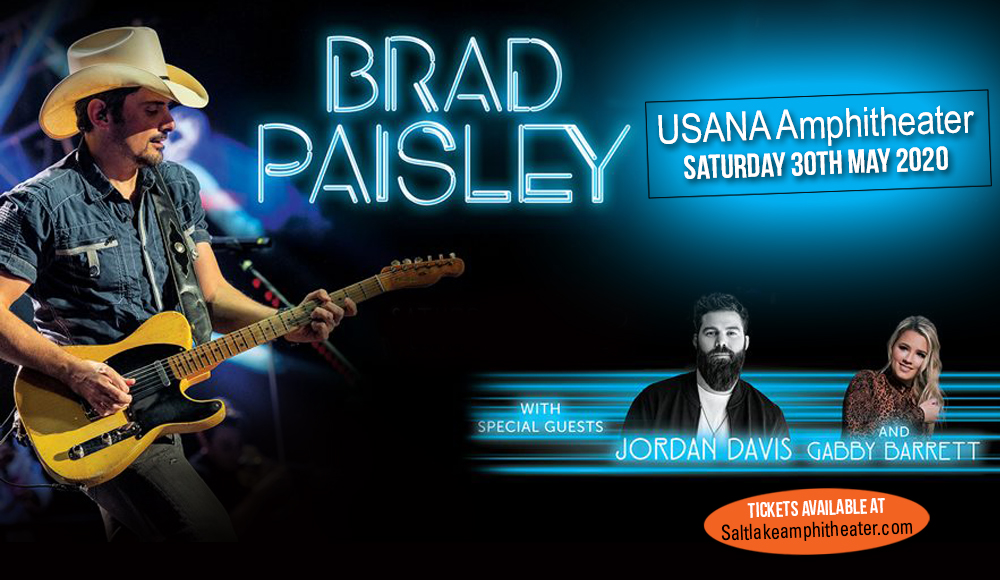 Brad Paisley has all that multi-faceted artistry that embodies all that is country music. No doubt about it, not only do his fiercely loyal fans hold him in high esteem, but the media, the press, the critics, and the music institutions recognize his contribution and influence to the country music landscape. Paisley is the Country Music Association’s reigning Entertainer of the Year. His H2O Tour was 2010’s top country trek in attendance. He is recorded and certified to have sold 12 million albums. He has scored 32 Top 10 singles on the US Billboard Country Airplay chart, 19 of which have reached number 1. He set a new record in 2009 for the most consecutive singles (10) reaching the top spot on that chart. Three Grammy Awards, 14 Academy of Country Music Awards, 14 Country Music Association Awards, and two American Music Awards. And it is likely to be a unanimous decision for those who voted for him to become a member of the Grand Ole Opry.

This is country music. No better way to experience it than from an artist who lives and breathes, and inspires it. Go, get your tickets now!