Watch the funniest duo get on stage to make you roll in laughter! Usana Amphitheater welcomes Dave Chappelle & Joe Rogan on Saturday 3rd August 2019 @ 7:30 PM. This show is guaranteed to be a short cut to laughter and joy! 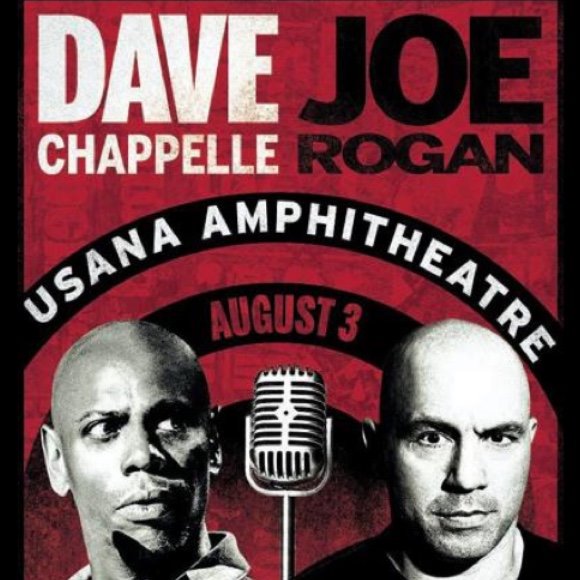 Chappelle received his first Emmy Award in 2017 for his guest appearance on Saturday Night Live. In 2018, he received a Grammy Award for his Netflix specials The Age of Spin & Deep in the Heart of Texas. Equanimity, his Netflix special, was nominated in 2018 for three Emmys and received the award for Outstanding Variety Special (Pre-Recorded). In 2019, Chappelle was selected to receive the Mark Twain Prize for American Humor presented by the Kennedy Center as America's highest comedy honor.

Having to performed more than 1,600 stand up comedies and selling out shows within minutes of their announcements, Dave Chappelle is THE comedian for fans who enjoy his satirical sense of humor. The internationally recognized stand-up comedian and actor’s trademark wit and sharp, irreverent social commentary explores race, popular culture, sex, drugs, politics, and fame.

A standup comedian for more than 20 years, Joe Rogan sells out events internationally with his inquisitive and intense comedic style. Other than being a stand-up comedian, he is also a mixed martial art (MMA) commentator, podcast host, businessman, former television host and actor.

Rogan released his third-hour special, Joe Rogan Live From The Tabernacle, exclusively through his website on December 18, 2012. He starred in the hour specials Talking Monkeys in Space (2009) now available on CD & DVD and Joe Rogan Live (2007) now available on DVD and released the CD’s Shiny Happy Jihad (2007) and I’m Gonna Be Dead Someday (2000).

Catch America’s funniest stand-up comedians and power duo, Dave Chapelle and Joe Rogan live at USANA Amphitheater on Saturday 3rd August 2019 @ 7:30 PM. Laughter is the best medicine for us all so grab your tickets now!

This is a strict NO CELL PHONES ALLOWED show. Please leave your phones in your cars or at home. Anyone who brings a cell phone will be required to place it in a locked pouch. Everyone is subject to a pat-down and wanding. Anyone caught with a cell phone inside the venue will be immediately ejected.