It's a glam-rock dream, as, still reeling from the success of 2016's tour, Def Leppard hit the road again for a mammoth tour, coming to USANA Amphitheater on Monday 19th June 2017! Joining them will be fellow rock icons Poison and Tesla!

“We’re thrilled to be able to take this tour to cities we didn’t play in 2016. The demand for us to return, or rather extend the tour was phenomenal!” said frontman Joe Elliott in a prepared statement. “There’s a great buzz around the band right now and we’re loving the fact that we can do this with the latest album being so well received.” 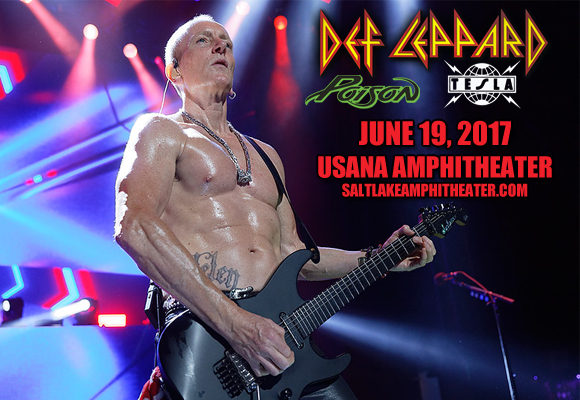 Def Leppard are a British rock group and, having sold over 100 million albums worldwide and with their albums Pyromania and Hysteria earning them RIAA Diamond certification, they are one of the world's best-selling bands of all time. The band saw huge success in both Britain and the U.S. throughout the 1980s and 1990s, and the band is one of only five rock groups with two original studio albums that have sold over 10 million copies in the U.S. 1987 saw the release of Hysteria, the bands biggest commercial success, which launched seven singles including: "Love Bites", "Pour Some Sugar on Me", "Hysteria", "Armageddon It", "Animal", "Rocket", and "Women". Def Leppard were inducted into the Rock Walk of Fame in 2000, and they were ranked No. 31 in VH1's "100 Greatest Artists of Hard Rock" and No. 70 in "100 Greatest Artists of All Time".