Disturbed made huge waves in the metal scene in 2000 when they released their seminal debut album The Sickness, launching ginormous hits like "Down With the Sickness" and "Stupify!" Now, they celebrate the two decades since the album's release with The Sickness 20th Anniversary Tour, coming to USANA Amphitheater on Wednesday 9th September 2020! They'll be playing tracks from the timeless record, plus songs from their latest album, 2018's Evolution! In support, alt-metal band Staind will be performing, as well as supergroup Bad Wolves! 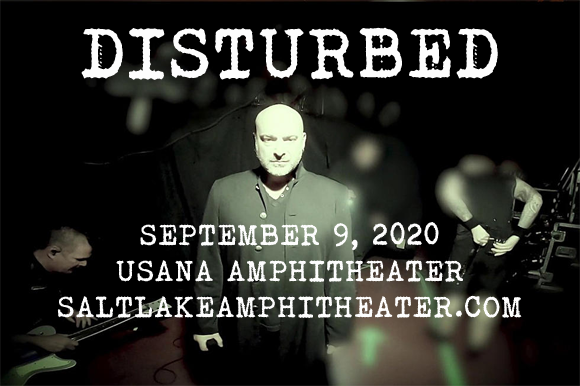 Fronted by singer David Draiman, Disturbed found fame in 2000 with its debut album The Sickness. The group had originally formed under the name Brawl in Chicago in 1994, with Draiman joining the band in 1996 after the departure of original frontman Erich Awalt. After The Sickness, the band became prominent in the nu metal scene of the 2000s and had five consecutive number one albums on the Billboard 200 – Believe (2002), Ten Thousand Fists (2005), Indestructible (2008), Asylum (2010), and Immortalized (2015) – making them one of the most successful nu metal groups of the era. Launching the hits "Are You Ready" and "A Reason to Fight," their most recent album, Evolution, was released in 2018.