Are you ready for Imagine Dragons?? The “Radioactive,” alternative rock group are on their way to the USANA Amphitheater on Friday 13th October 2017, bringing with them the incredible Grouplove and K. Flay!! Tickets in high demand – grab yours NOW for the chance to be there! 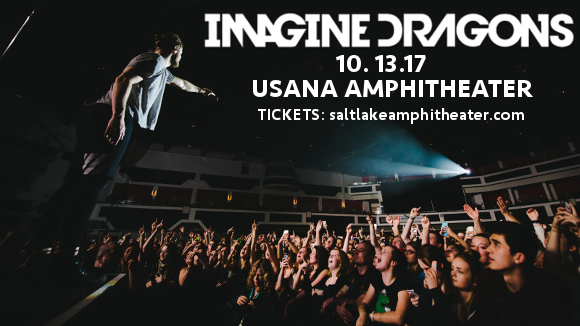 Hailing from Las Vegas, Nevada, Imagine Dragons were one of the biggest things to happen in 2012!! With their debut album “Night Visions,” and the singles “It’s Time,” and “Radioactive,” the band charted at number two both in the US and the UK, and in the United States sold more than 83,000 copies in its first week. The album has since been certified double Platinum. The band are now on tour with their new album, “Evolve”.

Also playing are indie rock/alternative dance act Grouplove. Their debut album “Never Trust A Happy Song,” featuring their hit song “Colours,” to a massive positive reception from audiences. The band are currently on tour with their third and latest album, 2016’s “Big Mess”.

Opening act K. Flay is the hottest and freshest new rap act out of Illinois. Her edgy, dark rhymes, sick beats and plaintive, yet aggressive singing vocal stunned critics and audiences alike with her first album, “Life as a Dog”. She will be touring with Imagine Dragons in support of her latest album, “ Every Where Is Some Where”.

What are you waiting for?? Don’t miss your chance to catch this trio of amazing acts live – book your tickets to see Imagine Dragons NOW while they last!!