If you're looking for a night of all out classic Bay Area rock, then "Don't Stop Believin'" as Journey & The Doobie Brothers come to USANA Amphitheater on Sunday 21st August 2016! Two huge bands under one roof, playing classic after classic from their heyday! Both highly-awarded acts are still hugely popular on the touring circuit and after seeing them live, you'll know why – it doesn't get much better than this! 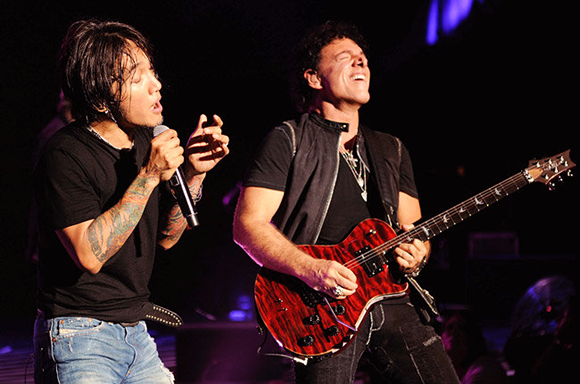 Since Journey's formation in San Francisco in 1973, the band has earned nineteen Top 40 singles, two gold albums, eight multi-platinum albums, and one diamond album). Originally called the Golden Gate Rhythm Section, the band started out as a progressive rock/jazz fusion act, comprising of former members of Santana and Frumious Bandersnatch. The group changed their name and shortly after gained a recording contract with Columbia records. Their first three studio albums were released in 1975, 1976 and 1977 respectively, but it was 1978's Infinity that lead them on their path to stardom. With a new lead singer, a new producer and a new more pop/rock influenced sound, Journey went on to have seven consecutive multi-platinum albums from 1978-1987 and released a string of hit singles including 1981's Don't Stop Believin', which in 2009 became the top-selling track in iTunes history amongst songs not released in the 21st century. Their worldwide sales have reached close to 90 million records, making them one of the world's best-selling bands of all time, and Journey ranks No. 96 on VH1's 100 Greatest Artists Of All Time.