Glam-rock gods Kiss are saying goodbye to life on the road with One Last Kiss: End of the Road Tour, coming to USANA Amphitheater on Saturday 14th September 2019! The veteran rockers and Rock and Roll Hall of Fame inductees are one of rock's most iconic and instantly recognizable acts, and they plan on making their final tour one to remember:

“All that we have built and all that we have conquered over the past four decades could never have happened without the millions of people worldwide who've filled clubs, arenas and stadiums over those years.

"Kiss Army, we're saying goodbye on our final tour with our biggest show yet and we'll go out the same way we came in… unapologetic and unstoppable." 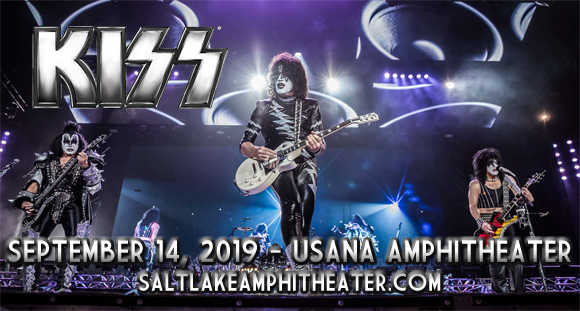 Formed in New York City in January 1973 by Paul Stanley, Gene Simmons, Peter Criss, and Ace Frehley, American glam metal band KISS released its self-titled debut album in 1974 and soon became known for its wild live shows that incorporated striking stage makeup and outfits, as well as  fire breathing, blood-spitting, smoking guitars, shooting rockets, levitating drum kits, and pyrotechnics. The group rose to fame in 1975 with its third studio album, Alive! and is now considered one of the best-selling bands of all time, having sold more than 100 million records worldwide, including 25 million RIAA-certified albums. From 1983 – 1995, the band performed without its signature face paint and costume, but when the original line-up reunited in 1996, it reinstated its trademark look. The band was inducted into the Hollywood Walk of Fame in 1999 and the Rock and Roll Hall of Fame in 2014.