Exciting announcement! OneRepublic are on tour!! With support from the incredible Fitz and The Tantrums & James Arthur, they’ll be coming to USANA Amphitheater on Wednesday 6th September 2017! That's right, it's time to catch OneRepublic, Fitz and The Tantrums & James Arthur LIVE so be sure to book your tickets early – they’re going to sell out fast!! 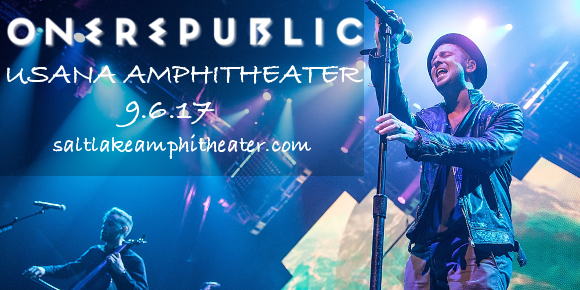 First achieving success on MySpace as an unsigned act, with their single “Apologize” topping the MySpace music charts, the band were briefly signed to Velvet Hammer before changing to Interscope and releasing their debut album, “Dreaming Out Loud,” in 2007. The album contained a new version of “Apologize,” remixed by Timbaland. the song was a smash hit, becoming the biggest radio airplay song in the history of the Mainstream Top 40 at the time. Since then, the band have gone on to achieve continued global success.

Opener James Andrew Arthur found his way to fame with appearance – and win – on the 9th series of British talent show The X Factor. Signed to Synco Music straight after the final, his first single, “Impossible,” shot straight to number one on the UK Singles chart, and his self-titled debut album hit the number 2 spot – kept from number 1 only by Eminem’s “The Marshall Mathers LP 2”!!

What are you waiting for?? Grab your tickets to see these 3 unbelievable artists TODAY!!