There's a beam of excitement brewing and it's clear to see why! With their just announced brand new tour, Steely Dan are back on the road! If you thought that wasn't enough, The Doobie Brothers will once again be joining them as they showcase all of their beloved classic songs. This is all happening at USANA Amphitheater, as preparations take place for Steely Dan & The Doobie Brothers on Sunday 10th June 2018! This full of talent display of the best selection of musicianship, will leave you wanting more, so don't delay – book today! 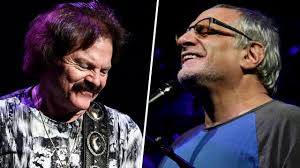 If not now, when?! This is what you should be asking yourself as one of VH1's 100 greatest musical artists of all time takes to the road for 2018… the legendary American rockers, Steely Dan are back in action traveling the country for an outstanding display this coming summer. Are you ready?

Walter Becker (guitars, bass, backing vocals) and Donald Fagen (keyboards, lead vocals) joined forces in 1972 and haven't looked back ever since. With their fine fusion of jazz, traditional pop, R&B, and sophisticated studio production, they really have continued to shine throughout the years and gain critical and commercial success starting from the early 1970s – a massively important time for music. With nothing but the best making the line-up and winding through the years, Steely Dan picked out the best musicians and developed and changed along the way Rolling Stone has called them "the perfect musical antiheroes for the Seventies" and they really are as one of the most understated artists to this date.

Two Against Nature, is of course one of their biggest albums, with it's success in the charts and grabbing the attention from so many, for it's release they received a Grammy Award for Album of the Year. Talk about a winning triumph!

Now of course we are in 2018 and you can catch them LIVE – with a colorful and jam packed career, it's bound to be a special night. More than 40 million albums worldwide now under their belts and an induction into the Rock and Roll Hall of Fame in March 2001 – what a perfect chance to see them do what they do best this coming year!

Don't miss your chance, it's here!