Sublime With Rome & The Offspring Tickets

Punk rockers pay attention: Sublime With Rome & The Offspring are coming to USANA Amphitheater on Saturday 30th September 2017 for the hardest-hitting show you've ever seen! So what are you waiting for? Grab your tickets quickly while you can and get ready to punk out!! 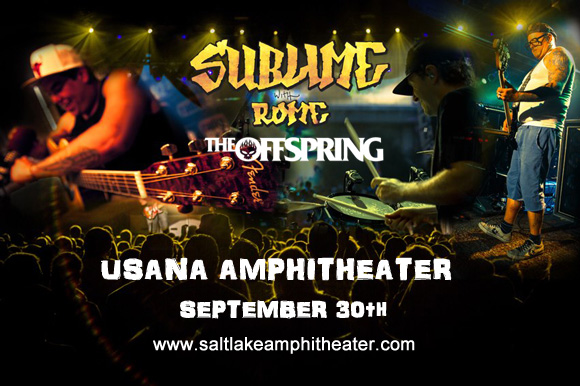 Sublime, formed in 1988, were one of the biggest ska punk bands of the 80s. Hailing from Long Beach, California, the band from start to finish was comprised of singer and guitarist Bradley Nowell, bassist Eric Wilson, and drummer Bud Gaugh. They released two studio albums before Nowell died of a heroin overdose – their third album, “Sublime” was released after Nowell's death, and went on to become their most popular album yet. Happyily, today, Sublime still perform, with Nowell replaced by Rome Ramirez under the name Sumlime and Rome.

Joining them on tour are the Offspring – who need no introduction!! Alongside bands such as Green Day, Bad Religion and Pennywise, they are credited for having contributed towards the revivial of interest in punk rock in the mainstream media during the 90s. Their first two albums gained them a devoted underground following while their third, 1994's “Smash,” blasted them to the forefront of popular music. With sales of over 11 million, it set the record for most albums sold on an independent label!! The band are currently producing their 10th album, due for release in 2018.