Pop rock fans, get ready for the nostalgia tour of the year!! The USANA Amphitheater is proud to present Train, the Goo Goo Dolls, and opening act Allen Stone to Salt Lake City on Tuesday Tuesday 18th June 2019 as part of their massive co-headlining North American tour!! If you live in Utah you can’t afford to miss this – grab your tickets now and get ready for the show of your life!! 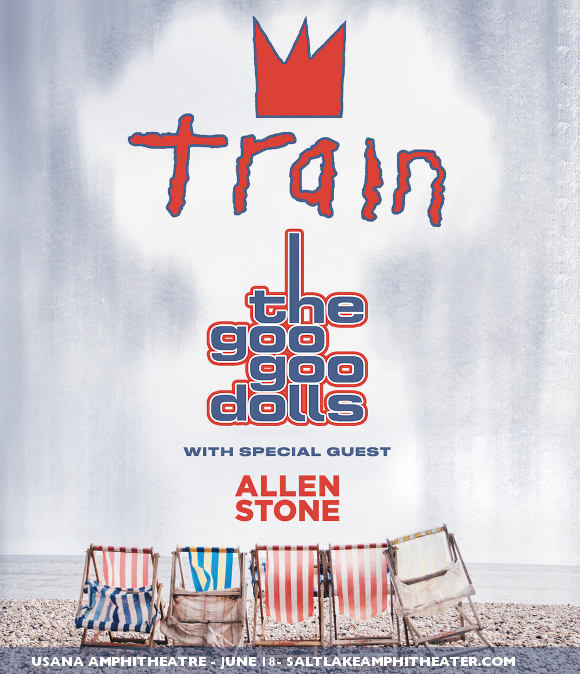 In the years since their formation, Train have had a series of smash hit singles, including “Meet Virginia,” "Hey, Soul Sister”, "Calling All Angels”, and the Grammy Award-winning  "Drops of Jupiter (Tell Me)”. The tour announcement comes together with the release of Train’s new “Greatest Hits,” album, their first compilation record, featuring their biggest singles from across the years in addition to a rendition of “Careless Whisper,” originally by George Michael, and featuring world-famous saxophonist Kenny. G. The Goo Goo Dolls, of course, are best known for their almost incomprehensibly successful smash hit “Iris,” which spent a record number of weeks at NO.1 on the singles charts in multiple countries, but have across the years released plenty more material that true fans adore.They released their latest album, “Boxes,” in 2016 to critical acclaim and a hugely enthusiastic reception from the public too.

Are you hyped for Train and the Goo Goo Dolls?? We sure are – get your tickets to see these two massive rock bands and Allen Stone NOW, before tickets sell out!!