There's no stopping Grammy Award-winning alt-country sensation Chris Stapleton… The "Say Something" singer has hit the road hard after his recent success, and will be bringing his extended All-American Roadshow Tour to USANA Amphitheater on Saturday 11th August 2018! Joining Stapleton on his first headlining trek will be special guests Marty Stuart & Brent Cobb, for a country line-up dreams are made of! 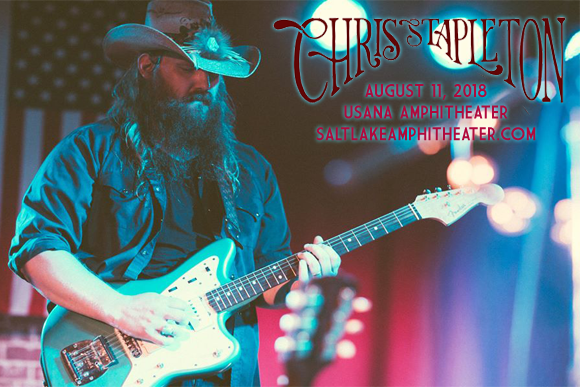 A breakthrough artist of 2015, country singer, songwriter and musician Chris Stapleton began his career as a professional songwriter, with over 150 songs that have appeared on albums by other artists, including number-ones by Kenny Chesney, George Strait, Luke Bryan and Darius Rucker. After two years as frontman of three-time Grammy Award-nominated bluegrass band The SteelDrivers, and a stint with The Jompson Brothers from 2010 – 2013, Stapleton signed to Mercury Nashville as a solo artist in 2013. Traveller, Stapleton's debut solo album, was released in 2015 to rave reviews and huge commercial success. Stapleton has had continued success as a solo artist and, to date, he has won five Grammy Awards, five Academy of Country Music Awards, seven Country Music Association Awards and two Billboard Music Awards, among others.