Foreigner bring their Juke Box Hero 2020 Tour to USANA Amphitheater on Tuesday 21st July 2020! The classic rock icons are back out on the road this summer, and this year they'll be joined by fellow '70s and '80s legends Kansas & Europe, for a night of nostalgic, singalong hits!

“We can’t wait to hit the road with our good friends Kansas and Europe and bring all our biggest hits to cities across the country,” Foreigner leader Mick Jones said in a statement. “We always have such a good time together, and combined we share some of the greatest songs in rock 'n' roll. We are so excited to see our fans from coast to coast and plan to make this summer our most epic tour yet!” 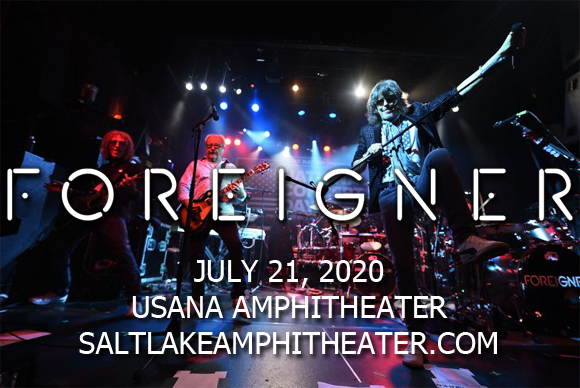 Best known for their radio staple hits "I Want to Know What Love Is" (which reached number one in several countries around the globe, including in the United Kingdom and United States) and "Waiting for a Girl Like You" (which sat at number two on the US chart for a record-setting 10 weeks), among others, Foreigner is one of the world's best-selling bands of all time. Since the band's inception in 1976, it has achieved worldwide sales of more than 80 million records (including 37.5 million records in the US ), beginning with its 1977 self-titled debut album, which launched the singles "Feels Like the First Time", "Cold as Ice" and "Long, Long Way from Home". The began was initially formed by two Brits: ex–Spooky Tooth member Mick Jones and ex–King Crimson member Ian McDonald, and American vocalist Lou Gramm, and its transatlantic line-up is where its name originated. There have been several personnel changes in the band over the years, but Foreigner's original surviving members sporadically take to the stage with the current iteration to give fans an amazing show.