EVENT POSTPONED (date TBA). Hold on to your tickets! They will be valid for the new date once announced.

It's going to be an incredible year for country music tours, but no-one does it quite like Kenny Chesney, who comes to USANA Amphitheater on Thursday 6th August 2020 as part of his Chillaxification Tour, which is set to be the highest-selling country music tour of 2020! The eight-time Entertainer of the Year is known for his high-energy, large-scale shows that pull out all the stops, and this one looks to be his biggest yet! Not only will the award-winning artist perform a jaw-dropping headline set, but he'll also be bringing an incredible line-up of support acts along for the ride, including Old Dominion, Florida Georgia Line, and Michael Franti & Spearhead! 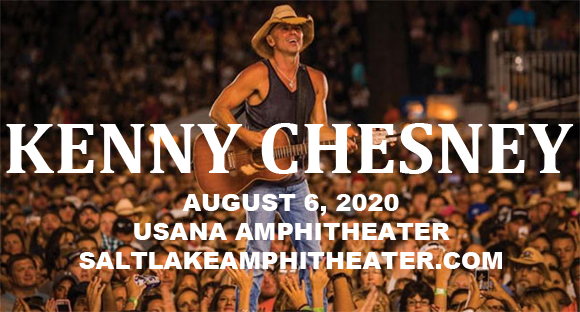 Despite making his debut in 1994 with the album In My Wildest Dreams, it took a little while for country music star Kenny Chesney to reach the heights of fame he would eventually scale. His 1996 album Me and You was his first to hit the top 10 of the US Top Country Albums Chart, but not his last – to date, he has had 20 top 10 albums on the chart, including 16 that have reached the top spot, with 10 consecutive number-one albums on the chart from 2004 – 2006. Chesney's down-to-earth nature coupled with his incredible showmanship made his music resonate with people, and this has been reflected in the charts – of his 63 singles, 40 top-ten singles on the U.S. Billboard Hot Country Songs and Country Airplay charts, including 30 that have hit the top spot, and 26 have reached the top 40 of the Billboard 200. Chesney has been awarded many times throughout his career, and has been named Entertainer of the Year four consecutive times by both the Country Music Association and the Academy of Country Music!