Multi-award-winning violinist and dancer Lindsey Stirling comes to USANA Amphitheater on Saturday 10th July 2021 as part of her Artemis Tour! The tour celebrates the release of last year's chart-topping album of the same name and features brand new choreography, costumes, lighting and more! Stirling is known for her outstanding live shows, which create an otherworldly, immersive experience that takes the audience on a journey to a magical, musical dreamscape realm where life's day-to-day cares melt away! Stirling is a masterful and captivating performer, and this show is a must for any fan! 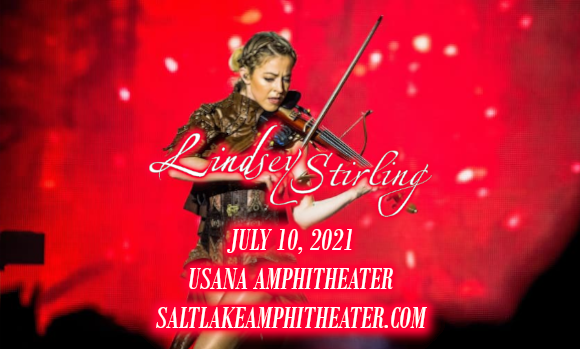 A multi-talented, multidisciplinary artist, Lindsey Stirling has made a career by carving out a niche for herself, combining her talents for playing the violin, dancing, composition, video editing, costuming and performance into something unique and captivating. Stirling also combines musical genres, drawing from hip hop, pop, classical and dubstep to create her sound. In 2007, she began making videos of her performances and uploading them to her YouTube channel. Three years later, she was a quarter-finalist on season five of the televized talent competition America's Got Talent. Although she did not win the competition, she was contacted by cinematographer Devin Graham with whom she began collaborating. This led to a rise in popularity for Stirling and the channel – her 2012 video "Crystallize" ended up being viewed more than 100 million times and was the eighth most watched video of the year on YouTube. To date, her channel has 12.3 million subscribers. Stirling has released five studio albums to date and has proven to be a successful crossover artist, with two of her albums hitting the top five of the Billboard 200, four of them hitting number one on the Top Dance/Electronic Albums and the top five of the Independent Albums Charts, and all five of them hitting number one on the Billboard Classical Albums chart. Her most recent album, Artemis, was released in 2019 and features collaborations with Elle King and Evanescence's Amy Lee.