Alternative rock fans get ready for an outstanding line up this Fall as Matchbox Twenty & The Wallflowers are both heading to USANA Amphitheater on Saturday 3rd June 2023 (Rescheduled from Saturday 4th June 2022) (Rescheduled from Saturday 18th September 2021)! Matchbox Twenty are always an incredible band to see live as they bring a solid collection of material from their long lasting career from the unforgettable 90s right up until today! Grab your tickets before it's too late! 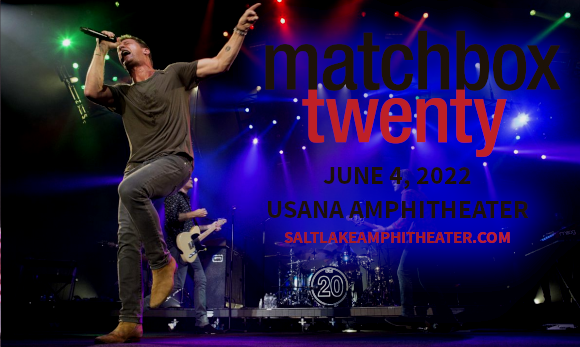 As America's much loved rock band, Matchbox Twenty have become widely successful not just within the US but on a global scale, known for their distinctive style and sound. Hailing from Florida, Matchbox Twenty kick started their career during the peak of alternative rock in 1995, the band took to the charts with their debut record, Yourself or Someone Like You that following year and the rest is history. With a mighty twelve time platinum certification for the album alone, Matchbox Twenty quickly became the band to watch.

Since their debut, Matchbox Twenty have displayed out of this world abilities for crafting hit songs. The members Rob Thomas (lead vocals, guitar, keyboards), Brian Yale (bass guitar), Paul Doucette (drums, rhythm guitar, backing vocals), and Kyle Cook (lead guitar, vocals) have showcased both their individual style and collaborative work. Matchbox Twenty have continued to release albums to follow up their debut with Mad Season in 2000, which grabbed the third position on the Billboard 200.

Throughout the decades, Matchbox Twenty have stayed at the top of the list for post rock fans all across the planet, their music has reached the charts time and time again in Australia, Canada, the UK, New Zealand and the US. During their career, Matchbox Twenty have taken time out in between a busy schedule for a hiatus but as they returned to the scene in 2012 – fans are grabbing the chance to see them live in concert once again.

Matchbox Twenty will be heading out on their unmissable tour in 2022, with special guests The Wallflowers. The night is guaranteed to be an experience to remember – book your tickets for yourself and your friends to join in on the excitement this coming Fall season! Don't miss Matchbox Twenty & The Wallflowers LIVE in concert!