Blasting onto the stage as part of a titanic package tour that is any metal fan's dream come true, Megadeth & Lamb of God comes to USANA Amphitheater on Wednesday 8th September 2021! It's not the first time on the road together for these colossal hard-hitters, but this year they're conquering North America with a tour that is bound to reach legendary status, as it mark's Dave Mustaine's first stint on the road since fully rcovering from cancer, and Lamb of God's first new music in five years! Also, they'll be joined by a mighty pair of support acts – Trivium and In Flames!

In Flames' Anders Friden says, “We were honored to be asked to join this package. We were actually supposed to take this summer off, but of course we couldn’t say no. After playing shows with all of these guys for years, 2020 is going to feel like a kick ass reunion. See you on the road, Jesterheads!” 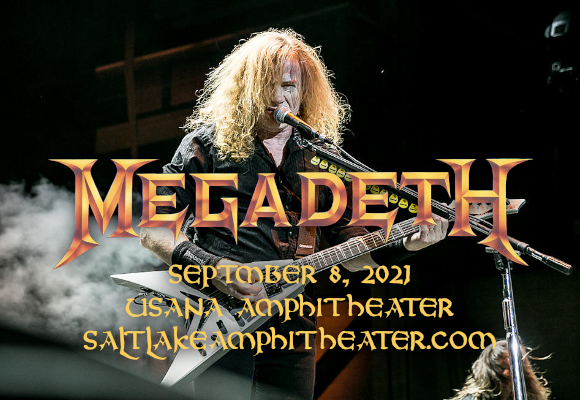 American groove metal band Lamb of God was formed in 1994 in Richmond, Virginia. The band originally performed and recorded under the name Burn the Priest, releasing a self-titled debut album in 1997. Two years later, the band renamed itself to Lamb of God, releasing the album American Gospel in 2000, but it was 2004's Ashes of the Wake that put the band on the map, reaching number 27 on the Billboard 200 and gaining gold certification from the RIAA. Sacrament (2006) followed, which was the top-selling heavy metal album of that year, and received the Album of the Year award from Revolver magazine, as well as earning the band its first Grammy Award nomination. Their sixth studio album, Wrath (2009), reached number two on the Billboard 200 and earned the band two more Grammy nominations. They followed with Resolution (2012) and VII: Sturm und Drang (2015), which both hit number three on the Billboard 200. The group currently consists of bassist John Campbell, vocalist Randy Blythe, guitarists Mark Morton and Willie Adler, and drummer Art Cruz. Lamb of God's heavy style, which draws from influence from thrash metal, death metal and hardcore punk, has been noted as being highly inflencial, and the group is considered a key component of the New wave of American heavy metal.