Sammy Hagar and the Circle are a band with no end of hits to pick from, bustin' out the tunes from Montrose, Van Halen, Sammy’s solo career, their own studio album (2019's Space Between), and even some Led Zeppelin tunes! And British rockers Whitesnake have a set-list that's just as stacked full of singalong tunes like “Here I Go Again”, “Still of the Night”, and “Fool for Your Loving”! So a night where both bands perform a headline set is going to be a night full of bonafide rock classics! Make sure you head to USANA Amphitheater on Thursday 10th September 2020 to see both of these bands bringin' out their best, plus there'll be a support set from the one and only Night Ranger! 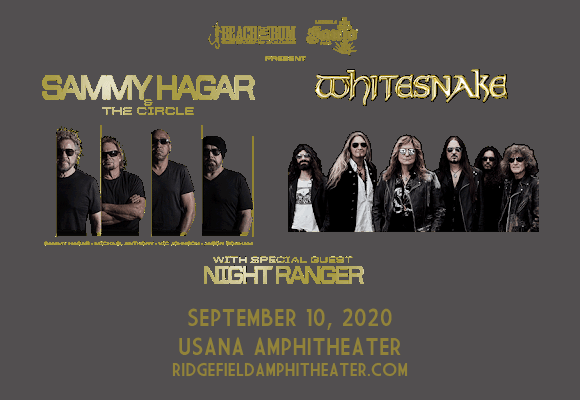 Whitesnake began after former Deep Purple vocalist David Coverdale gathered the backing band that supported him on his 1977 solo tour to form a new British hard rock group. Over the years, they found huge success in both the US and UK – Ready an' Willing (1980), Come an' Get It (1981), Saints & Sinners (1982) and Slide It In (1984) were all top ten albums in the United Kingdom, and their 1987 self-titled album went eight-times platinum in the US, launching the number one single "Here I Go Again".

Sammy Hagar and the Circle are a supergroup formed of ex-Van Halen members Sammy Hagar (lead vocals, guitars) and Michael Anthony (bass guitar, vocals), as well as John Bonham (drums, percussion, vocals) and Vic Johnson (lead guitar). The band perform a variety of covers from the group's previous outfits (Montrose, Van Halen, Chickenfoot, Led Zeppelin), and in 2019, they launched their debut album, Space Between, which features original songs, and topped four Billboard charts, as well as reached number four on the Billboard 200.