Old school fans of heavy metal, make note! The Scorpions are teaming up with Megadeth on their massive “Crazy World” tour – headlining the USANA Amphitheater on Tuesday 26th September 2017! This will be the metal show of the year!! There are still tickets left, but don't delay – they WILL sell out! Hit the “Buy Tickets,” button NOW to be sure of your place and get ready to rock out!! 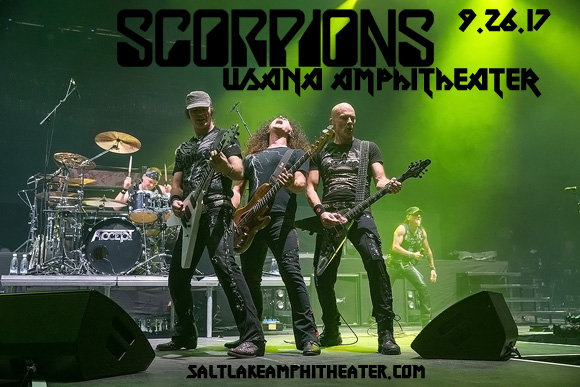 Starting out as a hard rock band, the Scorpions' sound shifted over time more towards that of heavy metal, the shift happening with the departure of Uli Jon Roth and his replacement of Matthias Jabs in 1978. Throughout the 80s, the Scorpions were prolific and successful with a string of much-loved albums including “Animal Magnetism”, “Blackout”, ”Love at First Sting” and “Savage Amusement”. “Crazy World,” released in 1990, a call for unity in the face of the political changed in Eastern Europe at the time, provides the name of this tour – never more relevant than it is now!!

Known as one of the “Big Four” of the most important bands in the early development of metal as a genre alongside Anthrax, Metallica and Slayer. The success of their independently released debut in 1985 caught the attention of larger labels, which led to a deal with Capitol Records. Their first release with Capitol, “Peace Sells… but Who's Buying?” was released the next year, deeply influencing the underground metal scene. Megadeth have sold over 50 million records across the planet and been nominated 12 times for Grammy Awards.