He was once a reluctant artist. But nothing and no can stop a star from shining, right? As Thomas Rhett embraced and accepted his destiny, his brilliance shone to the fore! Now this amazing country superstar is ready and raring to take center stage on full live concert mode at the USANA Amphitheater on Thursday 23rd July 2020. And with a little help from his equally talented friend, Cole Swindell, as guest performer, this will truly be an unforgettable country music adventure. Buckle-up and get your ticket ride! 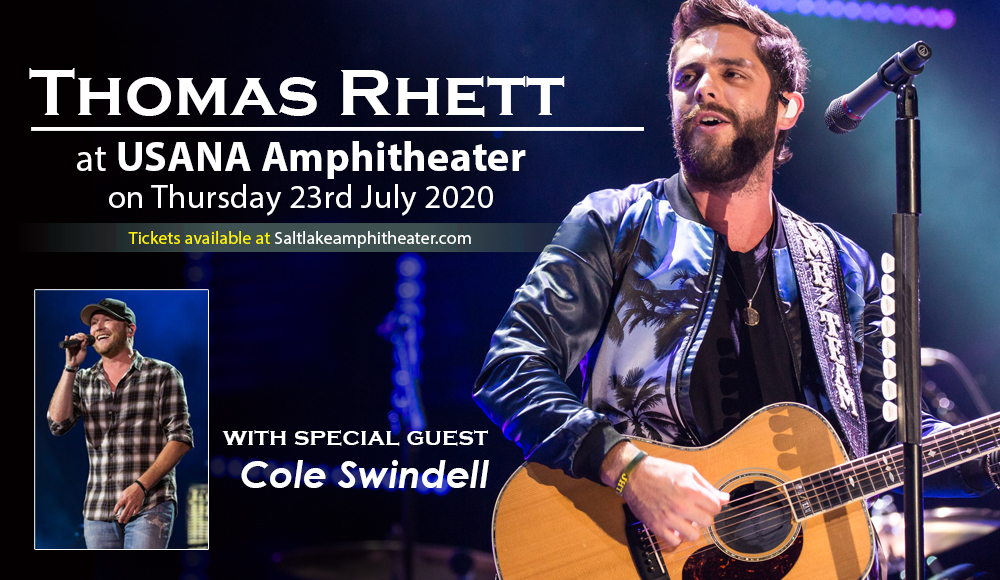 Most aspiring music artists do whatever it takes to reach that somehow elusive path to stardom. But not Thomas Rhett. He exercised resistance by getting involved in anything other than music — Kinesiology, business, anatomy, media…but his efforts were futile. Yet when he started embracing his talent for singing and songwriting, all roads opened up, and everything fell into place.

He landed a songwriting deal for his composition which landed on Jason Aldean’s "My Kinda Party" album, which turned out to be a double-platinum, country music best-seller album of 2011. Just like any struggling artist, he went through the ropes of hopping from one music label to another doing auditions, hoping to get even one call back. But Thomas — he got not one, but seven calls from labels offering him a contract! “I don’t have a clue where it’s going to go or where it’ll end up, but the journey is cool enough for me,” he muses. “I’m here for the ride and to entertain people.”

As for his signature style…“Country, rock and hip-hop were what I was raised on,” Thomas Rhett says. “It’s a strange combination, but it all leaks into what I write.”

Thomas Rhett has released four studio albums which have spawned a whopping nineteen singles on the Hot Country and Country Airplay charts, with thirteen reaching the No. 1 position, namely” "It Goes Like This", "Get Me Some of That", "Make Me Wanna", "Crash and Burn", "Die a Happy Man", "T-Shirt", "Star of the Show", "Craving You", "Unforgettable", "Marry Me", "Life Changes", "Sixteen", “Remember You Young” and "Look What God Gave Her".

“I think I’ve been directed here for a reason,” he surmises. “I still don’t know why. I don’t know if it’s to be some big star or if it’s to make a difference in somebody’s life along the way or to make somebody’s Friday night entertaining. It doesn’t really matter. It’s a journey, and I’m learning something new every step along the way.”

Take a leap of excitement with Thomas Rhett as he’s out to prove that country music rocks! Go and book your tickets now!