Why Don't We [CANCELLED] Tickets

The boys who got us singing 'If all it is is eight letters, why is it so hard to say? well it definitely isn't hard to say how much we love 'em, the one and only Why Don't We! The cheeky boy band who stole the hearts of fans across the globe is finally back for The Good Times Only Tour in support of their US Billboard 200 #3 album, "The Good Times and the Bad Ones". The tour takes a stop at USANA Amphitheater on Friday, 17th of June 2022. Catch the band behind '8 letters that shook the world to fall in love with these boys perform their biggest hits including "Big Plans", "I Don't Belong in This Club", "8 Letters", and their newest tracks off of their comeback album including "Fallin' (Adrenaline)" and "Lotus Inn". We bet you'll definitely be screaming those eight letters as the boys charm their way to the stage and sing your favorite anthems. So, don't miss out and book those tickets now! 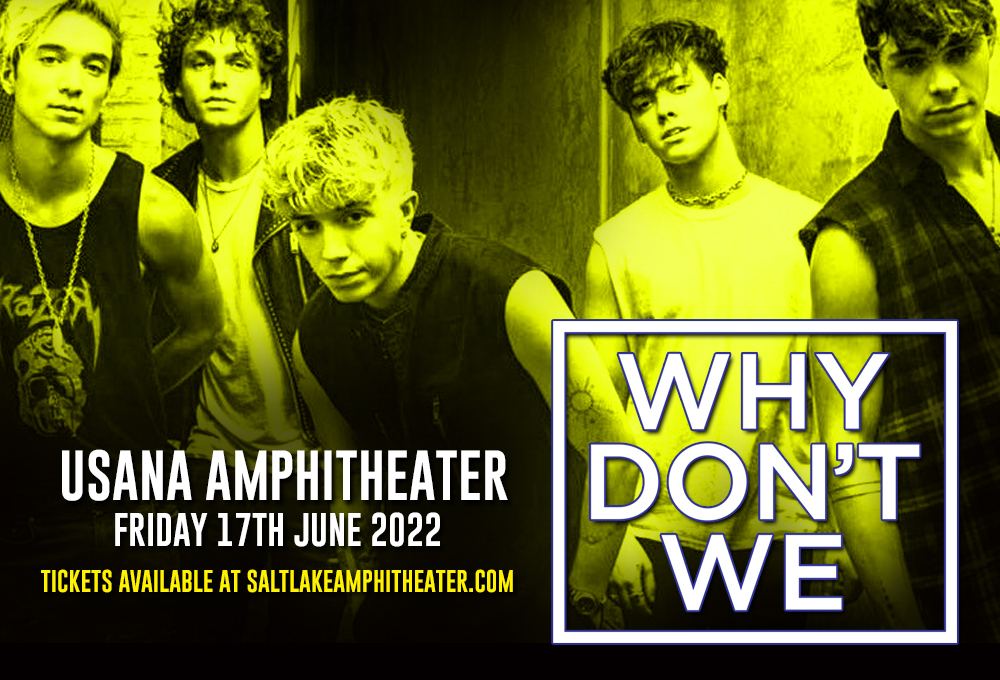 Friends Jack Avery, Corbyn Besson, Zach Herron, Jonah Marais, and Daniel Seavey met in Los Angeles and formed the band in 2016. They dropped a number of EPs and embarked on tours before dropping their debut album, "8 Letters", which brought them to the global stage in 2018.

8 Letters debuted at #9 on the Billboard 200, featuring its singles "Trust Fund Baby", "Hooked", "Talk", and the RIAA Platinum smash hit "8 Letters". After taking the world by storm with "8 Letters", the boys continued to drop smash hits after hits such as "I Don't Belong in This Club" with Macklemore, "Big Plans", and "What Am I" co-written by Ed Sheeran. After 2019's final single "Chills", Why Don't We went on a nine-month break.

By September of 2020, Why Don't We dropped their comeback single "Fallin' (Adrenaline)", off of their second studio record "The Good Times and the Bad Ones". The single marks their entry in the Billboard Hot 100. The album was finally released in January of 2021, mostly a self-produced effort with the help of productions by Travis Barker, Skrillex, and Timbaland. It hit #3 on the Billboard 200 chart, marking their chart entry.

2 albums in, and fans all over the world screaming eight letters directed to the boys, Why Don't We is in it for good times as they continue making waves by charming themselves in the pop scene through magnetic anthems that shake-up listeners' hearts.

Get ready for a good time with the one and only Why Don't We on The Good Times Only Tour, singing their biggest hits and fresh new bops off of their newest record. Book your tickets now!